For those who are new to airsoft, these guns shoot 6mm round pellets commonly known as “BBs.” They travel at speeds much lower than real bullets and although a bit painful when hit by one of these pellets, they cannot kill someone nor cause heavy-bleeding injuries unlike real guns. Even though airsoft is considered a toygun, safety precautions should still be taken into account when playing with these replicas.

As mentioned most airsoft are the exact copies of the actual guns. Some manufacturers even use real mould of the originals in order to create the look, feel and even weight of their real-steel counterpart. Automatic Electric Guns can only cause welts. It is still painful however when the BB pellets hit the skin, since they travel at high speeds. That is why during “skirmishes,” protective gears must be worn to avoid serious injuries, especially around the eyes. Also, thick protective outfits are also recommended to be worn. There are special camouflages similar to those used by cadets that can be worn. Sweatshirts and thick pants can also protect the skin from being directly hit.

Airsoft guns can be categorized into 3 types:

The Automatic Electric Guns (AEG) is among the most popular, although the most expensive, gun out of the three. Ranging an average of about $300, these guns are not anywhere cheap. Tokyo Marui is by far the most popular manufacturer of these guns. AEGs are powered by the Nickel Cadmium battery. It operates the motors that run the three gears inside the gun. These gears, in turn, compress and release the piston creating a blast of air that propels the BB pellets out of the gun barrel. The system allows the gun to function efficiently with its fully-automatic features in compare to most AEGs resulting in a realistic Rate-of-Fire. It can reach anywhere from 600 to 900 Rounds-per-Minute replicating the capabilities of the real-steel gun. For those who are advanced in the field, these are the guns of choice because even though pricey, they are worth it.

The next most popular gun is the gas-powered ones. Designed for those who are intermediate to the field of airsoft guns, they are less expensive than the AEGs. There are several types of gas-powered guns. The most popular one is the Gas-Blowback, also know as GBBs. They operate using CO2 to compress the air used to propel the BBs out of the barrel. The same gas is used to cycle back the slide, creating a recoil by cycling the slide back and forth. The gas is either stored in the magazine or on-board. Similar to AEGs, the Gas-Blowbacks allow realistic semi-automatic firing. The gun allows the ease of magazine reload and making it very appealing to its users.

Finally, the Spring-powered airsoft guns are among the least expensive. They can go as low as $20 for a pistol. They are among the guns that novice or beginners use to start out with.

And finally the spring-powered Airsoft gun. Spring-cocking guns are true to their name in that you cock the spring first, and then fire. Cock spring, fire, cock, fire, cock, fire, etc. These guns are usually magazine fed and semi-automatic, but they must be hand-cocked after every shot. This system is very cost-effective, and the guns are surprisingly sturdy. Every Airsofter, in his lifetime, has owned at least one spring-powered gun, either a pistol or a rifle. Due to it’s relatively cheap price-range, this is usually the gun of choice for the person just starting to play airsoft. A spring-powered handgun can be purchased for as little as $20.

Airsoft and Tac City® in the News

Tac City® Airsoft Fullerton was recently featured in the local California newspaper, Fullerton News Tribune. The spotlight features a brief history of airsoft, Tac City®, and the issues of airsoft’s realism to firearms. 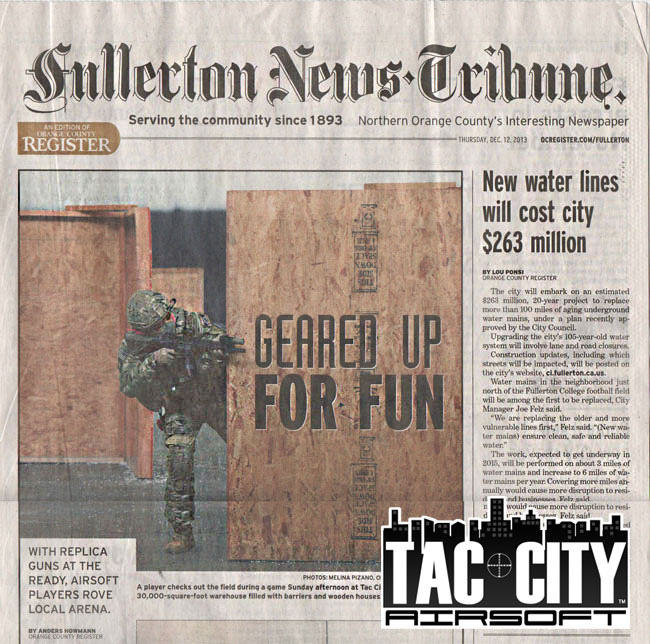